Today’s date in the New Coligny Calendar is

The Coligny Calendar, or Gaulish Calendar, was a lunisolar calendar which was used in Gaul in the latter part of the B.C.E. period and, possibly, into the beginning of the C.E. period. It used a five-year cycle with intercalary months in order to keep it in synchronisation with the solar year.

The workings of this calendar were preserved in a bronze tablet that was discovered buried near Coligny in France in 1897. It is thought that the tablet itself dates from towards the end of the 2nd century.

It is assumed that the tablet was buried because use of the calendar was banned by the Romans as an indication of druidic practices and, more importantly, flouted the rule that the Julian calendar should be the official calendar in all parts of the Roman Empire. 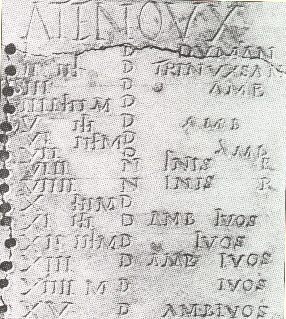 The workings of this calendar were preserved in a bronze tablet that was discovered buried near Coligny in France in 1897. It is thought that the tablet itself dates from towards the end of the 2nd century. It is assumed that the tablet was buried because use of the calendar was banned by the Romans as an indication of druidic practices and, more importantly, flouted the rule that the Julian calendar should be the official calendar in all parts of the Roman Empire.

A section of the tablet is shown in the image on the right. The holes on the left-hand side of the image are where a peg would have been inserted to indicate the current date in the calendar.

How the Calendar Worked

The calendar had 12 months of 29 or 30 days, giving a common year of 354 days. Every two and a half years a 13th “intercalary” month was inserted to keep the calendar in approximation with the solar year. These were inserted before the 1st month (Samonios) and between the 6th and 7th months (Cutios and Giamonios) in the 3rd year of each five-year cycle. It is not known for sure what these extra months were called, but it is thought that the first intercalary month was called Quimonios and the second one Rantaranos or Bantaranos, based on remains of verses in the recovered fragments of the tablet.

The months were divided into two halves and the beginning of the second half was marked with the term ATENOUX or “renewal”. For this reason some scholars suggest that the month started at full moon and therefore the start of the second half of the month was at new moon, hence the “renewal”, but it is not known for sure.

The Coligny calendar as reconstructed consisted of 16 columns and 4 rows, with two intercalary months given half a column (spanning two rows) each, resulting in a table of the 62 months of the five-year cycle, as follows (the intercalary months are marked “CIALLOS” in the table):

The structure of the calendar has been reconstructed with a reasonable level of confidence due to the regular composition of the tablet, apart from the 9th month Equos, which seems to have varied between 28, 29 and 30 days depending on the year of the cycle.

The following table shows the sequence of months in the five-year period, with the suggested length of each month shown.

The aim of reconciling the lunar cycle with the tropical year is only met with poor accuracy, however, five tropical years corresponding to 5 × 365.24219052 = 1,826.21 days (with an error of 4.79 days in five years, or close to one day per year). Again, other adjustments may have been made to compensate for this discrepancy, but this is not clear from the remains of the tablet.

My reconstruction of the calendar has been adjusted to try to provide a more accurate system. In this version there are 6 months of 30 days and 6 months of 29 days in a standard year. Therefore, Equos always has 29 days, except in the fifth year of the cycle when an extra day is added for adjustment purposes. Additionally, in every sixth cycle the extra month of Rantaranos is omitted. This is the system used to calculate the date that appears at the top of this page.

There is also debate about when the calendar began each year. Samonios could be cognate with samon, Gaulish for summer (Lambert p. 112). Le Contel and Verdier (1997) argue for a summer solstice start of the year. Monard (1999) argues for an autumn equinox start (by association with Irish Samhain). I have chosen the latter option as this ties in with my New Celtic Calendar.

I decided to begin the modern epoch of this conjectural calendar on 9th October 1999. This date was chosen because it “corresponds with a new moon on the date of the beginning of European winter. (when the sun is at 15 Deg Scorpio).“. This would have been closer to the 7th November, however, but remember that in the first year the extra month Quimonios is added at the beginning, and as there was a new moon on 9th October 1999 this is the start date chosen for the modern calendar. According to my information, however, the new moon in October 1999 actually took place on 9th October, so this marks the beginning of year NCC 1 in the New Coligny Calendar.

Timey's Calendarium is a site about time, dates and ways of measuring and counting them. Here you can find out about different types of calendars used around the world as well as fictional and notional calendars and calendar proposals that have been suggested by people to replace the one we use in everyday life.